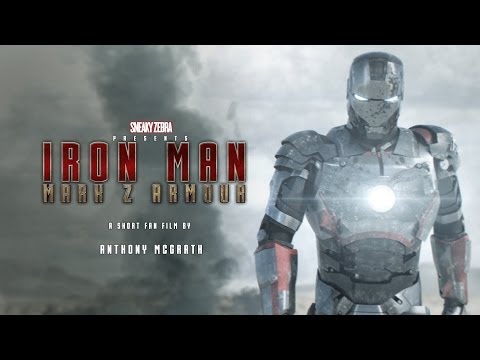 On his route to Stark Tower, Tony Stark comes under attack from the Ten Rings! Luckily he has is brand new Mark Z suite with him to test out.

Sneaky Zebra are proud to present this video by Anthony McGrath, sound design is by Gary from the team but everything else is produced, created and the work of Anthony (and gave us specific permission to use on our channel). We're hosting it on our channel to help him get some exposure. Plus - it's damn awesome!

This is a non profit fan film as a homage to the awesome work Marvel does! We do not claim copyright on Iron Man or any of its associated work.

More about the project in his own words below.

The main concept stemmed from firstly wanting to do something that hadn't been done in the films. What I love about the films isn't so much the flying around shooting stuff which we know he can do (and is ace) - it was always the way the suits are built to deploy and get him out of dangerous situations. Iron man 3 progressed the suits technology into flying and combining together but I wanted to keep it a little more grounded technically and not have pieces whizzing about.

Right away I got on with laying down a really fast animatic and it quickly became apparent that the sequence would work well. From there i started building higher resolution assets and the piece came together.

One of the things I had to do was put him in peril in some way! so I decided on having him attacked by an F14 tomcat -I'd read somewhere that some of the disused and retired F14's were bought up by Iranian military. I thought it might be quite nice to hint at it having been stolen (hence the Ten Rings logo on the wing) and used to attack Tony Stark with his own military technology. I had to take some liberties - the Jericho missile would probably nuke his car and half the landscape but it was fun to have him under attack from that technology.

I managed to persuade an incredible Character Artist, Mark Cushley to get on board after seeing my early edit and he agreed we really need to see RDJ's Tony Stark in there.

I was put into contact with Elliott Crossley by the guys at Sneaky Zebra Nick Acott & Gary Scullion. I passed Elliott a rough outline of what i wanted to happen with the audio and he just took it and ran giving me more than enough to work with - as soon as this was dropped in and before the lip sync was completed I knew it was going to work as a sequence.

The 3d elements were put together in Maya with Mental Ray and Vray used for rendering. After effects allowed me to composite the various render layers. One shot in particular has more than 190 layers and numerous nested composites. I exported motion data from Maya and dropped it into after effects - this allowed me to do properly tracked 3d lens flares, depth of field, motion blur and refraction effects all in after effects along with composite skies and other backdrop details.
I started using online batch rendering withhttp://www.ranchcomputing.com. This allowed me to get some of the more difficult HD render passes out of the way.

Overall the piece has taken a long time - more than 18 months. However that has all been in my spare time and apart from Tony Stark all the assets have been modelled by myself which took up a good chunk of time in the beginning. My wife gave birth in february 2012 which has made spare time pretty hard to get hold of, and i have been working extra hours on DriveClub for Playstation4 so iIve had to squeeze it all in around both of those areas of my life.